skip to main | skip to sidebar

When can we hike the new lands?

The newly acquired lands are not yet available for public use. There are no roads, parking areas, trails, or anything else. In some cases the prior tenant has not moved off the property and it would be trespassing to go on the property.

Limited hiking is available at the Summit Conference Center. Call ahead for availability for hours.

What are the future plans for the Park?

The State Parks Division will begin to develop a Master Plan for the current holdings. This will include facilities, trails, uses, roads, entrances, etc. Various inventories of the properties need to be made so that no unnecessary damage occurs during development.

Public meetings will be held to gather input from users and neighbors. Look for more information on this in the Fall of 2008 on the FriendsofHawRiverSP.org website.
Posted by Citizens For Haw River State Park at 8:22 PM 117 comments:

More great news about the new expansion of the Haw River State Park. Taft Wireback's N&R article today explains the probable addition of the adjoining Haw River Plantation (Wallis property). This 140 acre tract has already had some clearing for housing. That cleared area may prove helpful for necessary restroom facilities and as a parking area for recreational vehicles. Other parts of this tract may also prove to be a possible area for camping.

The appraisal of this 140 acre tract took into consideration that it has significant infrastructure already installed including some roads, electricity, water, etc. This tract also includes two houses that may provide rental housing for park rangers or park staff.

Several other key land acquisitions are possible down the road to make this a dynamic state park. If this Wallis tract is added to the Haw River State Park that will bring the current total land to 1,167 acres. (Original Summit tract 335 acres, Bluegreen tract 692 acres and the Wallis tract 140 acres.)
Posted by Citizens For Haw River State Park at 1:35 PM 1 comment:

How Does the State pay for the 692 acres?

According to the State's Press Release posted now on our web site:

The acquisition will be financed by issuing certificates of participation through the Parks and Recreation Trust Fund.

In its 2007 session, the N.C. General Assembly authorized the Parks and Recreation and Natural Heritage trust funds to each issue up to $50 million in certificates of participation for land conservation. The certificates are similar to bonds and will be repaid with future revenues into the trust funds over a 20-year indebtedness. In the recent past, such certificates have been issued for special projects of the state parks system, including a 3,000-acre acquisition at Lake James State Park, construction of visitor facilities at Lake James and land acquisition at Mayo River State Park in western Rockingham County and Chimney Rock State Park in Rutherford County.

Purchase of the approximately 300 acres at the existing Haw River State Park and its environmental education center was financed by regular revenues of the Parks and Recreation Trust Fund. Any future visitor facilities at the state park are likely to be financed through the trust fund, as well. The trust fund is supported by the state’s tax on real estate deed transfers and is the principal funding source for state park land acquisition and capital projects.
________________

More than 3,500 acres of land will likely be brought under conservation by the state parks system as a result of grants this fall from the Natural Heritage and Clean Water Management trust funds.

The parks system received $5.6 million in grants from the Natural Heritage Trust Fund in November and $5.46 million from the Clean Water Management Trust Funds in September and November.

Coupled with $9.89 million in allocations from the Parks and Recreation Trust Fund, the grants will support land acquistions at 10 state park units ....

Posted by Citizens For Haw River State Park at 12:12 AM 7 comments:

Article by Taft Wireback with the Greensboro News & Record


A Florida development company is dropping its plan to build a golf-course community next to Haw River State Park and will sell the land to North Carolina's state park system for $14 million.
The company notified Guilford County officials by letter Thursday that, "Bluegreen communities has reached an agreement with the state of North Carolina regarding the 690 acres adjoining Haw River State Park that our company had hoped to develop into a housing community."
"As a result of our agreement with the state, we intend to withdraw our rezoning request for this property," Bluegreen vice president Tom Powers stated in the letter to Kirk Perkins, chairman of the Guilford Board of County Commissioners. "The property will be sold to the state for use as a state park."
The letter was delivered mid-afternoon by Greensboro lawyer Henry Isaacson, who had represented Bluegreen in its rezoning request.
The N.C. Department of Environment and Natural Resources later announced the land agreement, which is subject to approval by the governor and the Council of State.
Under the agreement, the state will purchase three tracts held by Bluegreen for $14 million. The acquisition will be financed through certificates of participation to be repaid with future revenues into the Parks and Recreation Trust Fund.
The state parks system expects to complete the purchase by the end of February.
The Guilford County Board of Commissioners was scheduled to hear an appeal next week of an August decision by the county planning board, which rezoned the land to allow the golf-course development. The appeal was filed by park supporters, including the nonprofit Citizens for Haw River State Park.
Haw River State Park was authorized by the General Assembly in 2003 and now covers about 300 acres, including the Summit Conference Center that the state bought from the Episcopal Diocese of North Carolina two years ago.
State officials had hoped to buy the golf-course acreage all along, but Bluegreen got there first to forge agreements with several property owners to buy the land.
Perkins said public sentiment was overwhelmingly against Bluegreen's proposal and it was good to see the project conclude in a way that appeared to be good for all sides.
"There are certain places that just need to be protected and his definitely is one of them," he said of the acreage in Northern Guilford and southern Rockingham counties that will now be added to the park.
Contact Taft Wireback at 373-7100 or taft.wireback@news-record.com
Posted by Citizens For Haw River State Park at 8:01 PM 2 comments:

Haw River upland scene from a few years back. It could happen again. 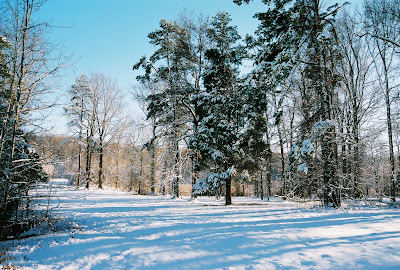 2008 is a time for a new beginning. Our hope is that the three property owners will all agree that their beautiful land can best be utilized by the Haw River State Park. NCDENR must also understand that these property owners have, by working with Bluegreen, significantly determined the value of their property.

Many of us hope that the developer, Bluegreen sells its option/contract on the 692 acres to NCDENR for the expansion of the Haw River State Park and protection of this section of the Haw River corridor. If the state and Bluegreen cannot reach an agreement, and Bluegreen's option/contract with the land owners expires in Jan. 2008, the state should then purchase the 692 acres directly from the three property owners at the fair market appraised value significantly determined by Bluegreen's proposed development.

The land owners must be wooed and courted by the state once Bluegreen is out of the picture. It is good for the property owners that they have a second eager buyer (the state) since it appears doubtful that Bluegreen will receive their necessary rezoning, special permits to draw water from the Haw River and permits to build a community septic system near the banks of the Haw River.

It should be noted that distant, outlying sprawl developments, like the proposed Patriot's Landing, remain a drain on us Guilford County tax payers. Such developments seldom replenish the significant taxes they consume. Patriot's Landing would have required the use of tax money for significant school expansion at all grade levels, road expansion and road corridor entry additions, a new fire department location and new sheriff department services, etc.
Posted by Citizens For Haw River State Park at 6:29 PM 1 comment:

Links to other Haw River Sites